skip to main | skip to sidebar

AEROTECH FMS PROUD TO BE ASSOCIATED WITH DELIVERING OF FIRST DORNIER 228 TO SEYCHELLES
http://www.theafricanaviationtribune.com/2013/04/seychelles-air-force-takes-delivery-of.html

The Seychelles Air Force has taken delivery of a Dornier 228 patrol aircraft following a donation from the government of India as agreed to under an agreement signed between the two nations in 2011 in which India would provide a once-off grant of USD28.79 million for the supply of the maritime aircraft.  A further aircraft is due in 2014. 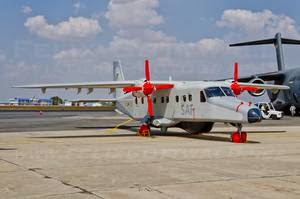 The SAF Do228 in Bangalore (FGWalt)
The Seychelles Air Force (SAF) Commander, Major Michael Pouponneau, has said the Dornier's arrival is a major boost to the Indian Ocean island's maritime patrol and anti-piracy drive as the aircraft is equipped with state-of-the-art weaponry, loud-hailers, radar equipment and night-vision cameras.

As part of the deal, four Seychellois pilots have already been to Hindustan Aeronautics' main headquarters in Kanpur, where the Dornier are made under licence, for flight crew training.

The Seychelles Nation says that since February 2011, the Indian government has helped Seychelles with the use of a similar aircraft, based in Seychelles, along with a 30-man Indian Navy detachment, to help patrol the Seychelles’ exclusive economic zone (EEZ) for anti-piracy efforts at the request of President James Michel.
Posted by Aerotech FMS Pvt. Ltd. at 2:51 AM No comments: